Just slightly over twelve months ago, all of us at Broadway Sacramento were busy readying the 2020 Broadway At Music Circus season: Los Angeles, New York and Sacramento auditions had been completed; casting offers had gone out and many had been accepted; production staff had been recruited; sets were being designed; costumes rented; subscriptions sold. Then the pandemic hit. And seemingly overnight, most everything stopped.

One extremely hard year later, things are looking up. Our diligence has kept COVID-19 at bay for many in our community, science has miraculously produced several vaccines that are now in wide distribution, and sales are robust for our Fall 2021 Broadway On Tour season and the regional premiere of HAMILTON. Unfortunately, the end results of our tremendous progress will not come in time for us to realize a 2021 Broadway At Music Circus season.

Thanks to the support of our patrons and donors, Broadway Sacramento has survived this forced hibernation and we have prepared for the delayed 70th anniversary season of summer shows in-the-round. Most of the titles patrons looked forward to seeing in 2020 will now be produced in 2022, including the Broadway At Music Circus premieres of KINKY BOOTS and THE COLOR PURPLE. Two of the previously scheduled shows – SPAMALOT and ANNIE – are no longer available to us. We have luckily found exciting alternatives – the Broadway At Music Circus premiere of SOMETHING ROTTEN! and the return of the beloved THE SECRET GARDEN for its first production since 1999.

Broadway At Music Circus subscribers who purchased tickets for the 2020 season will receive a letter in the mail informing them of their options for 2022. Subscription renewal packets will be sent in late fall. Your loyalty to Broadway Sacramento and love of musical theatre inspire us – even in these quietest of times – to create more Broadway At Music Circus magic. We look forward to sharing it with you once again.

Broadway At Music Circus is a truly unique musical theatre experience, renowned by theatre professionals and fans across the country. Each summer the Broadway At Music Circus series features new productions of classic musicals with some of the most talented professional actors available, Tony-winning Broadway veterans and stars of touring Broadway, film and TV. The theatre-in-the-round setting puts audiences so close to the action that they feel like part of the show. It’s been a summer tradition in Sacramento for generations. 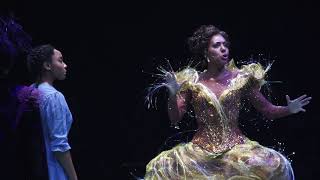